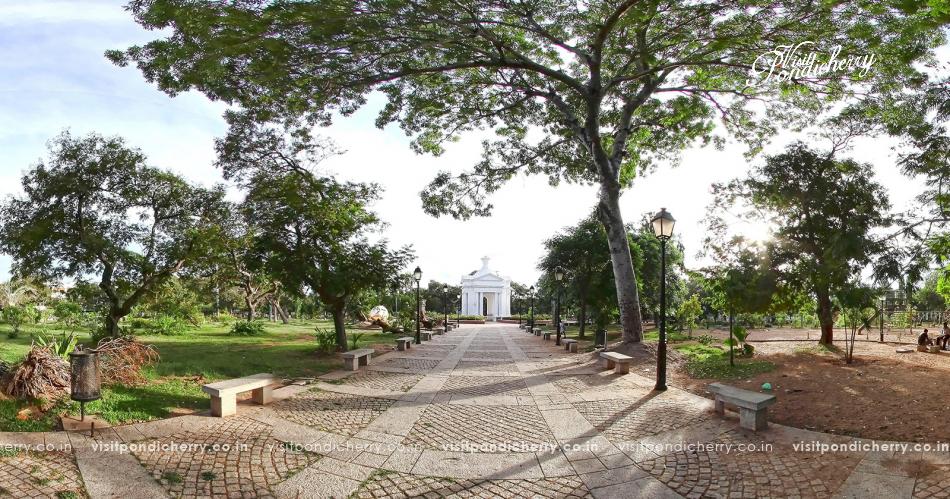 The Bharati Park is in the green centre of the French Town and its lush trees provide ample relief from the scorching sun on a hot summer day. With children playing in the ponds, on the hill or in the traffic park, grown-ups sitting or lying on granite benches, families on a picnic and occasional sit-ins of striking citizens, the park is the most appreciated public area in the town. Strolling under the cool trees is as dynamic as it gets unless people rush to the spot when an occasional movie is being shot.

The Aayi Mandapam has become the unmistakable centre from which four lanes divide the Park in almost equal parts. The area is dotted with ancient sculptures and not so ancient statues. Around it stand a number of stately buildings:

The Raj Nivas - The residence of the Lt. Governor, formerly the Palace of the French Governor of Puducherry.

The Museum - situated opposite the Raj Nivas on St Louis Street, houses an interesting collection of excavated artefacts from the Roman Times and heritage from the French Period.

Towards the east, hidden behind a thick wall and huge trees lies the former French bandstand on which the French Army Band used to play. On the southern side are the Puducherry Art Gallery, Hotel Qualithe and the Chamber of Commerce, all built with a street front in colonial style. The UCO bank is surrounded by its own garden premises with a mighty stair which invites you to the interior of a traditional bank.

Past the General Hospital on the western side are the Legislative Assembly and the Cercle de Pondichery. Turning back towards the Raj Nivas on the left is beautiful Villa Aroume, which houses the Ashram Dining Room.