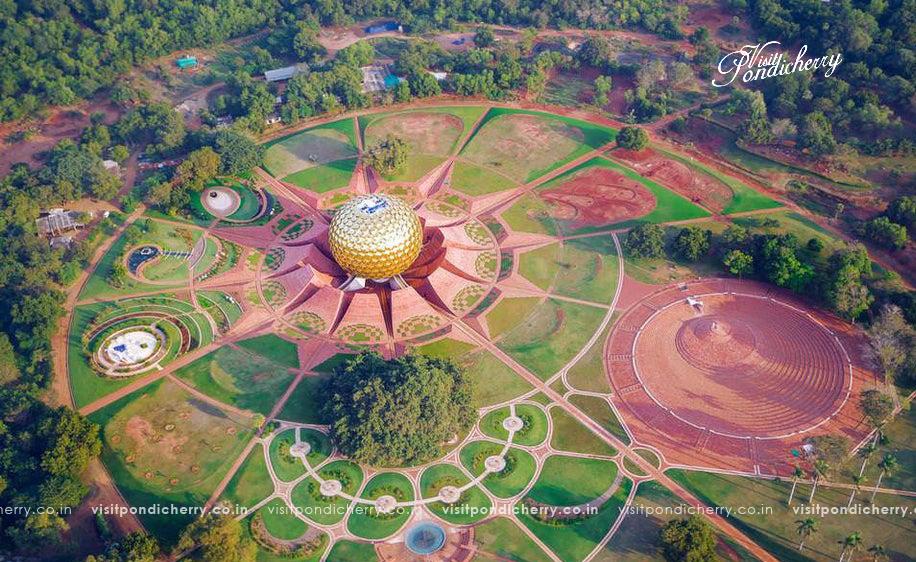 The Matrimandir (Sanskrit for Temple of The Mother) is an edifice of spiritual significance for practitioners of Integral yoga, in the centre of Auroville established by The Mother of the Sri Aurobindo Ashram. It is called soul of the city and is situated in a large open space called Peace. Matrimandir does not belong to any particular religion or section

In June 1965, the Mother started speaking of her intention to build, north of Puducherry, a “universal town where men and women of all countries are able to live in peace and progressive harmony, above all creeds, all politics and all nationalities. The purpose of Auroville is to realise human unity.”

From the outset she explained that, at the centre of her town, there would be a “Park of Unity” and that, in this park, there would be something she called at first a “Pavilion of Truth”, or “Pavilion of [Divine] Love”, or “Pavilion of the Mother”. Eventually she named this Pavilion “Matrimandir”, which she translated in English as “The Mother’s Shrine”. She added that the “Park of Unity” would consist of twelve gardens representing the “twelve attributes of the Mother” and that eventually the Matrimandir and its Park of Unity would be surrounded by a Lake.

Towards the end of 1965 the Mother decided that a lone Banyan tree would be the geographical centre of the future town. At the time the site was almost totally barren.

Early 1968, the Mother gave their names to Matrimandir’s twelve Gardens:

Note : First time visitors booking must be made in person by the individual seeking to concentrate in the Matrimandir at the Visitors’ Centre Booking Office, any day except Tuesday between 10 and 11 am or 2 and 3 pm, after seeing the 10 minute introductory video called "Matrimandir"