Our Lady Of Angels Church, Puducherry 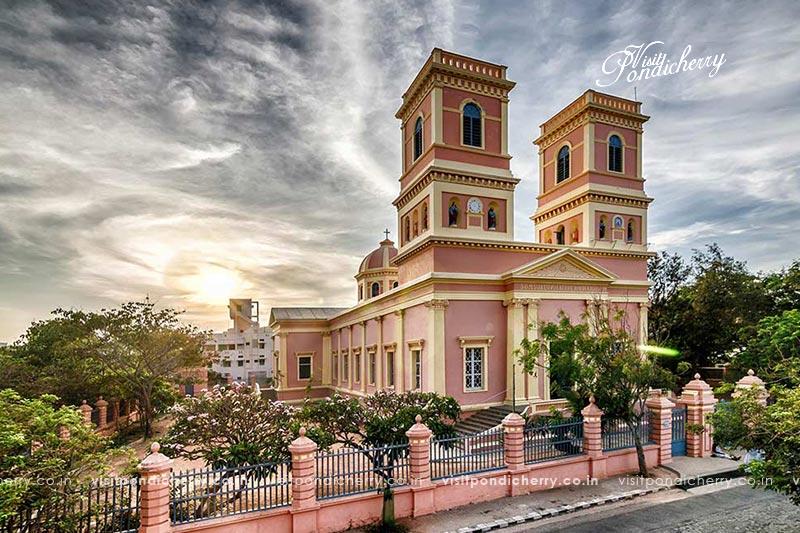 Our Lady of Angels Church (also called Église Notre-Dame des Anges, White Chapel, Kaps Koil) is the fourth oldest church in Puducherry, a Union territory in South India. The original structure was built in Greco Roman architecture by Napoleon III in 1855, with the architect being Louis Guerre. It is the only church that offers mass in three languages namely French, Tamil and English.

Our Lady of Angels Church is a working church with hourly prayer and daily services and follows Roman Catholic sect of Christianity. The chapel was controlled by Capuchin priests, Holy Spirit Fathers subsequently and finally during 1887 changed hands to Foreign Mission Fathers from Paris. It is one of the most prominent landmarks in Puducherry and faces the Bay of Bengal.

The first arrival of the Franciscan Capuchins to India was Pondicherry in 1632. Capuchins were the very first missionaries to Pondicherry. The first mission came to an end within two years in 1634. When Francois Martin founded the city of Pondicherry in 1673, he invited the French Capuchins from Madras for the spiritual animation of the French and for the evengelization of Tamils. In 1674, the French Capuchin missionary Cosmos de Gien founded the first Christian mission in Pondicherry. The Church of the Capuchins served as the seat of the Capuchin Prefects. After 154 years of zealous missionary enterprise the Capuchin mission was handed over to the Holy Spirit Fathers in 1828. This Capuchin mission came to an end due to the shortage of missionaries in France. Based on records in National Archives in Pondicherry 1777, historian Jayasheela Stephen argues that the Capuchins, the original monks, wanted the church to be with a height of 40 ft (12 m) in 1746 and planned to build it close to the fort. As per the rule of the Governor of Pondicherry, no building could be built 200 m (660 ft) close the fort and with a height above 50 ft (15 m).

The proposal was rejected stating the risk and the monks withdrew the idea. Our Lady of Angels Church is the fourth oldest church in Puducherry. The original structure was built in Greco Roman architecture by Napoleon III (c. 1852-70) in 1855, with the architect being Louis Guerre. It is believed to be based on Notre-Dame in Paris and the Basilica at Lourdes. Napoleon III visited the chapel as the first place when he visited Pondicherry. It is understood that there were four churches in the campus and British demolished the church and converted it into two orphanages. It is believed that Napoleon III donated an oil painting of Our Lady of Assumption to the church.