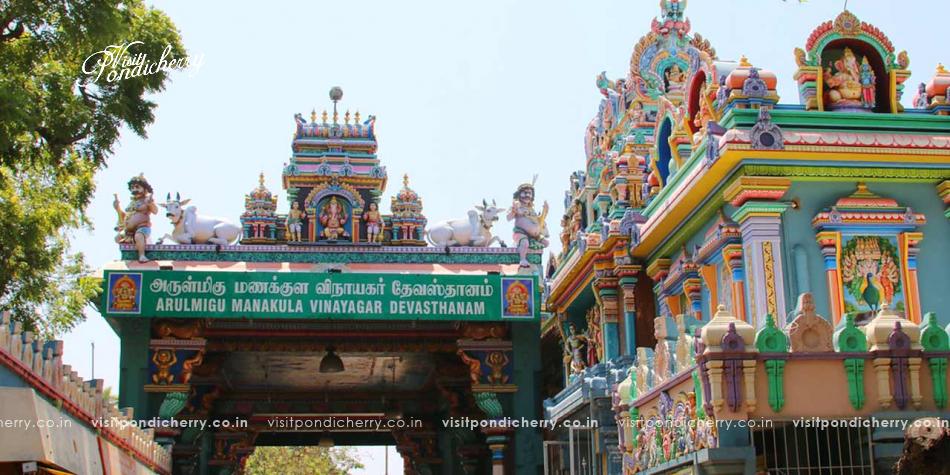 Sri Manakula Vinayagar Temple was in existence before the French came and settled in Pondicherry i.e. before 1666. According to Sasthra, Lord GANESHA is named in 16 types based on his various forms out which this god facing the east cost near Bay of Bengal it has been named as Bhuvaneshar Ganapathy, now called as Manakula Vinayagar. In Tamil 'Manal' means sand and 'Kulam' means pond near the sea, earlierly which was full of sand around pond. So the people called the god as Manal Kulathu Vinayagar [means God near the pond of sand].

Later it is named as MANAKULA VINAYAGAR the Jesuits and missionaries tried to demolish Manakula Vinayagar, but they could not demolish the temple. During 1700 French prohibited performing poojas and festivals particularly on Fridays in the temple. All the Hindus who were worshipping Lord Vinayaga objected and migrated to Moratandi English Territory.

Location of the Temple

The Manakula Vinayagar Temple is one of the famous ancient temple is in Puducherry, a Union Territory situated in the southern part of Indian sub-continent. The temple is 400 meters West of Bay of Bengal Sea, 165 Km South of Chennai (Capital of Tamil Nadu State), 23 Km of North of Cuddalore and 35 Km East of Villupuram, TamilNadu. The main deity ?Manakula Vinayagar?(Pranavamurthy) of this temple is facing east and the temple is bordered on east by Orlean Street (Now Manakula Vinayagar Koil Street, south by Jawaharlal Nehru Street, north by Law-de-Louristhon street and west by a canal running north-south.

The golden chariot was made purely on the basis of collection of donations from the devotees. The total weight of the gold used in this chariot is 7.5kg with the estimate of around Rs.35 lakhs. The height & breadth of the chariot is 10ft & 6ft. The chariot was fully made up in teakwood covered by copper plates duly engraved with beautiful art works and the plates duly attached with golden rakes. At first the running of the said Golden Chariot was held on 05-10-2003 in a grand manner. At present most of the devotees are very much interested to fulfill their prayer by pulling the Golden chariot inside the temple on payment of fixed fees. Once in year i.e. on Vijayadhasami day the said Golden Chariot run outside of the temple i.e. only in the maada veedhis.