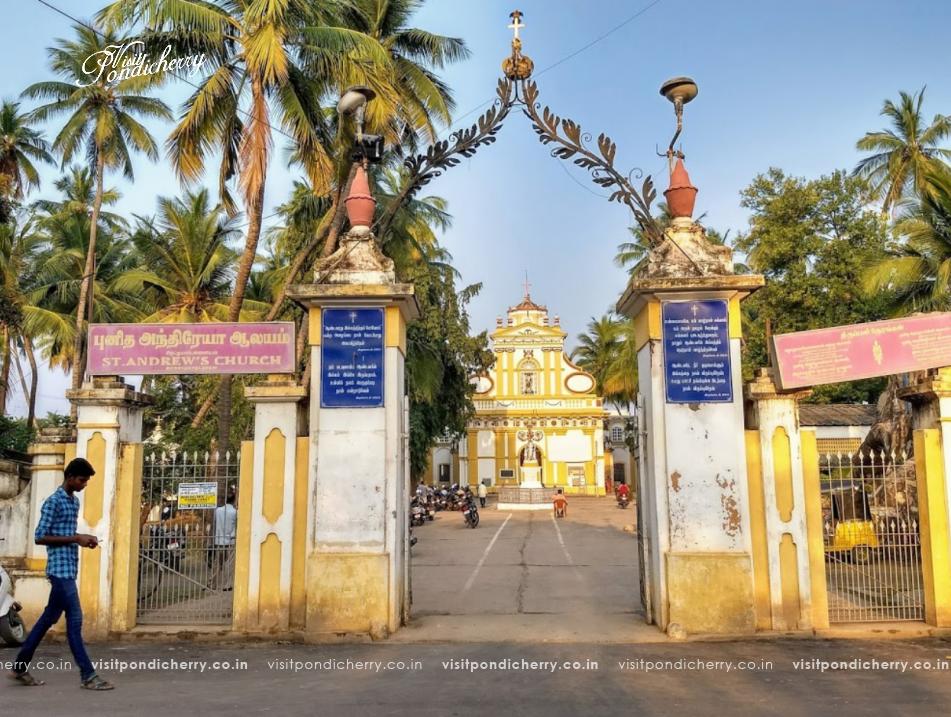 St. Andrew's Church is one of the oldest churches in Reddiarpalayam area of Puducherry, a Union territory in South India. The original structure was built in Gothic architecture in 1745 by Kanakaraya Mudali, the longest serving dubash of the French East India Company. During the opening of the Church, Mudali hosted a feast that included all castes and religions, the first of its kind that is recorded in the history of South India. It is believed that the Church was destroyed by the British in 1761 and was later rebuilt in 1830. It is the first Church in South India to have an inscriptions made in Tamil during the times.

St. Andrew's Church is a working church with hourly prayer and daily services and follows Roman Catholic sect of Christianity. The chapel was controlled by Capuchin priests initially and then changed hands to Petiti Seminaire School Fathers up to 1860. In modern times, it is under the dominion of Archdiocese of Pondicherry and Cuddalore. It is one of the most prominent landmarks in Puducherry.

The details of the church are found in the inscriptions made in the temple in Tamil, the first one of its kind in South India. Pondicherry was founded by 1674 by Francois Martin, while the French East Indian Company by Thaniappa Mudaliar in 1691 CE. The colony passed hands between the French and British colonial Empire till 1816 when it became a permanent colony of the French. Some accounts place that the church was built in 1675 by Capuchins following the Apostle St. Andrew. Other accounts place that the church was built in the fort by Father Ephraim de Nevers in 1642 as a temporary structure, which would go on to be modified as a permanent structure in 1675. As per other accounts and also the official history of the Church, it was built by Kanakaraya Mudali (1696- 1746), the grandson of Thaniyappa Mudaliyar and the longest serving dubash for the French Colonial Empire in 1745. He hosted a multi caste religious feast in the region subsequently attended by people across different castes and religions in the region. It is believed that the Church was destroyed by the British in 1761 and was later rebuilt in 1830.